The History of The Sisters of Mercy in the Dunedin Diocese

The arrival of the first Sisters of Mercy in the Dunedin Diocese was the result of a visit to Europe in 1889 by Bishop Patrick Moran, the Bishop of Dunedin at that time. One of the priorities of his trip was to find a community of Sisters who would come to staff a school at Gordan, now known as East Gore in Southland. Bishop Moran recognised the rapid growth of the Catholic population in the early 1880s in this rural area of the diocese. His aim was to establish churches and schools that would support the spiritual and educational needs of the families who were settling in the area where the waters of the Waikaka and Mataura rivers meet.

Bishop Moran’s request to the Sisters of Mercy at Carrick on Suir, in Ireland was answered favourably. After prayer and consideration two sisters, Alacoque and Agnes Ryan, who were blood sisters as well as religious sisters volunteered for the new mission. They were to be accompanied by Mother Patrick, Kate Healy and Bridget Doyle. Mother Brigid Murtagh was the senior member of the group and was to become the superior of the new foundation. They left London on January 17, 1890 aboard the ship ‘Orizaba’ and stopped in Melbourne before landing in Bluff on March 10 1890.

The parish priest in the area, Father Newport and the local people had responded to the instructions in the bishop’s letter to “make preparations for the Sisters”. A house on Railway Esplanade was converted to a convent and made ready and more land was bought to build a school near the church and presbytery.

The Sisters were met and welcomed at the port of Bluff by Bishop Moran who accompanied them by train to the Gore Railway Station. Here they were met and welcomed by Father Newport and a large crowd of people. They were driven by horse drawn carriage to their new home. It must have been some consolation that many of the settlers whom they had come to live among and serve were Irish and so there would have been some connections with their homeland.

A few days later the Sisters met the forty three children of the area and arranged them in primary and secondary age groups. The primary children’s schooling was paid for by their parents in provisions for the Sisters. The secondary students’ tuition was paid for by parents who could afford it.

The parish primary school was set up in the Town Hall until the school was built meanwhile the secondary students were taught in a room in the convent. This was seen as a temporary arrangement and plans were prepared for the building of a new school at Gordon.

On a sunny Sunday afternoon in early October 1890, only eight months after the Sisters’ arrival, Bishop Moran’s dream for his school in Gordon was realised. He, the priests and Sisters, along with a large crowd of parishioners from the district gathered to officially bless and open the new St Mary’s School.

During the high Mass that was celebrated Kate Healy (to be known as Sister Mary Patricia) and Bridget Doyle (to be known as Sister Mary Columba) were received into the novitiate (a time of training for life in a religious community) of the Convent of Mercy. It was a memorable event for all who were part of it and a special day to celebrate in the history of the Sisters of Mercy and Catholic education in the Diocese of Dunedin. In the midst of all the joy, Sister Patricia and Sister Columba must have shared some sadness at being so far from their family and friends as they made their commitment to their religious life. The day was brought to a close, as was the custom, with a concert given by the children.

There was sadness in the Mercy Community in Gore. Sister Alacoque and Sister Agnes left Gore to return to Ireland. On the way there they stopped in Australia to visit family. While they were there the sisters were invited to establish a school and convent in Mansfield. They accepted this invitation and formed the Mansfield community which flourished for many years.

The sadness in the community continued as on September 22, 1893 Sister Columba died from pneumonia less than a year after her profession. Her death was felt very deeply by the other sisters in her community and in the parish, especially by the children. At the end of the following year Mother Brigid resigned from her leadership of the community and left the Gore area. Her health was not good and, as the oldest member of the original founding group of six sisters, she had done her work and it was time for her to rest.

During the next few years young women from Ireland and Southland added to the numbers of sisters in the Gore community and they were welcomed and received as postulants (women who were ‘asking’ to join the community) into the Gore Mercy community. This lightened the load of the sisters who staffed the school as the roll continued to increase.

In May 22, 1895 Bishop Moran, who had brought the original group of Sisters from Ireland, died. He was greatly mourned by his priests and people and it is fitting he lies in the Southern Cemetery in Dunedin surrounded by them. One of his pastoral priorities was Catholic education and the establishment and achievement of his schools were very important to him. Bishop Moran had not only established the Mercy community in Gore, he had also recruited Dominican sisters from Ireland to set up schools throughout the diocese. The Dominican sisters are an enclosed order and as such their work was restricted to the classroom and they were not permitted to visit families.

Bishop Michael Verdon was appointed the new bishop early in 1896 and he was anxious to build on the work of his predecessor. He recognised a great need among his people for care of the sick, the poor and many orphaned children, especially in Dunedin and particularly among the heavily populated area of South Dunedin. Bishop Verdon needed to secure the services of sisters who could help meet both the increasing social as well as the educational needs.

He approached the Superior of the Mercy Sisters in Singleton, Australia, Mother Stanislaus for help to meet the social, spiritual and educational needs of his people in the Diocese of Dunedin. Seven sisters volunteered – Mother Kostka, Mother Augustine, Sisters Imelda, Bertrand, Clare, Teresa and a novice, Sister Berchmans. Accompanied by Mother Stanislaus they left Singleton by train for Sydney where final preparations for the trip to New Zealand were made. After a five day journey on the sailing ship the Talune, they arrived in Wellington and then set sail for Lyttleton where they stopped over with the local Mercy Community. They finally berthed in Port Chalmers on January 17, 1897 to be welcomed by Bishop Verdon and many local people. They were driven by horse and cart from the port to their new home in South Dunedin.

The Sisters were settled into a modest wooden house beside St Patrick’s church and within a day of their arrival they were visiting the sick of the parish. Seeing the Sisters dressed in their black habits walking the streets in twos was not something the people were used to but they very much appreciated. They soon became known as the ‘walking sisters’.

On February 2, 1897 St Patrick’s school, staffed by Mercy Sisters, opened for the new school year with 156 children. This school had been well established seventeen years earlier by the Dominican Sisters who had made the trip each day from their convent near Tennyson St in the city centre down to South Dunedin. It would be more convenient now for the Mercy Sisters to live among the families they were serving.

In July, 1897 the community of the Sisters of Mercy which had been established in Gore in 1890 and the newly formed Dunedin community became one foundation of Mercy for the Dunedin Diocese.

The South Dunedin convent became the Mother House. This house was to become the heart of the works of Mercy in the Dunedin area and beyond in the 1900s. From this house over the next 65 years the Sisters would move out to establish Mercy schools all over the diocese: St Patrick’s South Dunedin, 1897, St Thomas’ Winton, 1898, St Mary’s Mosgiel, 1898, St Peter’s Wreys Bush, 1899, St Philomena’s High School 1907, St Gerard’s Alexandra, 1912, St Columba’s Riverton, 1913, St Patrick’s Nightcaps, 1917, St Francis Xavier Mornington, 1919, St Bernadette’s Forbury, 1935, St Brigid’s Tainui, 1939. In 1945 it was time for St John’s School in Ranfurly, the second to last of the Mercy schools, to be established. It was followed by Sacred Heart Waikiwi, 1962. St Peter’s College, Gore was established in 1969 and was staffed jointly with Mercy Sisters and Rosminian Priests and Brothers. Moreau College, Dunedin, was established in 1976 when St Philomena’s College and St Dominic’s College merged. It was staffed by Sisters of Mercy, Dominican Sisters and lay staff. 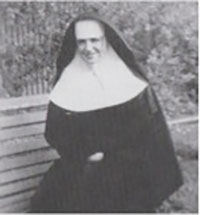